Wake The Deaf recently made a mix called Indian Summer and included us on it!

To download it, go right HERE.
Wholly Roller recently reviewed our EP and you can read all about that right HERE.
We're starting to piece together the new EP and are planning on having it out into the ether by January 2012. We'll be putting out MP3's off it before hand and we're in the pre production of a video to accompany one of the tracks. It might have a lot of balloons and a disco ball in it. We're also going to be doing a split 7" with ROYAL FOREST in the foreseeable future. We love those guys. Below is a pic taken from our good friend Brandon from Magnet School / Shifting Sounds at the Quiet Company album release show. 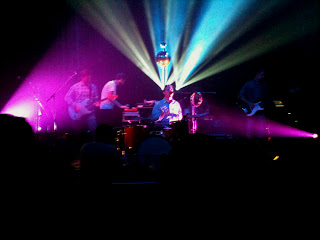